Welcome to Make it Count: A Titanic Fansite since 2002

Since 2002 Make it Count has been a fansite and resource for those who love Titanic. When James Cameron's masterpiece Titanic came out in theaters in 1997, it was an instant hit. Something about the way that Rose and Jack wanted to live their lives struck a chord deep within movie-goers that made people obsess over this movie. If you are here, it is probably because you are one of them, like me. So, please enjoy this fansite, sign the guestbook and don't forget to Make it Count!

I'm back from my Titanic tour across the United Kingdom! I had an amazing time, and took tons of photos. I'll be posting some new (exclusive!) shots of the Swim Dress from a new exhibit at Titanic Belfast, as well as reviews and photos from all the Titanic-related spots I visited. Stay tuned!

I've recently learned that James Cameron and Jon Landau will be in Belfast on September 7 to unveil the Titanic Fan Mosaic. Amazingly enough, this actually coincides with when I'll be in Belfast! I'm having a hard time finding any details about the unveiling (apparently there will be another screening of the film in 3D as well), so if you have any, please forward them on to torli[at]make-it-count.org!

Exciting news! This September I'll be taking a self-guided "Titanic Tour" of Ireland and England, visiting Belfast, The White Swann Inn in Alnwick, and Southampton. I'll return with all kinds of beautiful photos, reviews of the best Titanic-related places to visit, and lots of stories!

The new Titanic DVDs are now available for pre-order from Amazon! Release date is set for September 10. The new discs are loaded with extra special features, and if you're lucky enough to have a 3D TV, you can continue to re-live the 3D experience at home!

I've added a tutorial on how to do Rose's make-up from the Dinner Scene. You can check it out here. It's also available on my blog, Humblebee & Me.

You've probably seen this image floating around on the internet, and you're probably wondering why Jack had to die if they could both fit on the door. 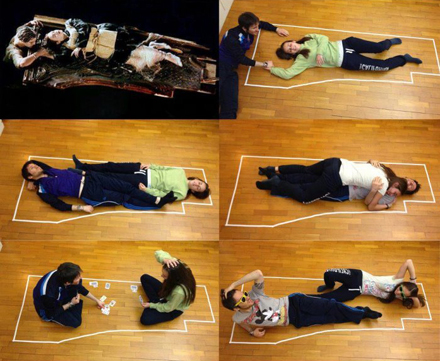 My oh-so-smart friend Dallas did the neccessary calculations to figure out if they could or couldn't. Check it out!

Kate always looks incredible, and the Titanic 3D premiere in London was no exception. Steal her look straight from her make-up artist, Lisa Eldridge, with this great video tutorial she did.

I was recently featured in Grazia magazine for my love of Titanic! Read all about it here! 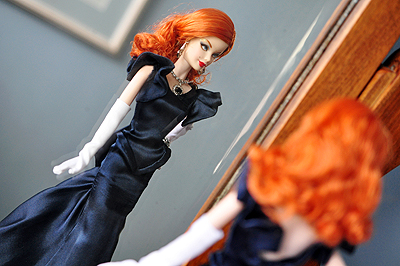 I've just returned from seeing Titanic in theatres again. It was stunning, as always.

Ancestry.co.uk has put a great collection of Titanic related documents online. I recommend taking a look!

iTunes is commemorating Titanic with a collection of all the Titanic-related media available on iTunes. Click here to view the collection. It's wonderfully extensive, with music, books, films, and even apps!

UInterview will be interviewing Billy Zane (the infamous Caledon Hockley, of course!) about his role in Titanic to celebrate the release of Titanic 3D. If you want to submit your questions to Billy, you can by visiting http://uinterview.com/ and clicking on Billy's head in the top right corner.

Two days into Titanic week #100, and the publicity surrounding Titanic (the ship and the film) is insane! Be sure to check your local TV listings for the slew of Titanic-related documentaries that are airing this week, many of which are new. And be sure to see Titanic in 3D before Titanic week ends—what could be more perfect?

Welcome to any visitors from Grazia!

Titanic week #100 begins tomorrow! I'll be wearing my hat and surrounding myself with all things Titanic. What are you doing?

Today's the day! Titanic is back in theatres in 3D! I've seen it twice already; after the Valentine's Day showing I caught the Fan Sneak Preview on Monday. The poster they gave out is quite nice, too! The 3D glasses are also different from the ones they gave out on Valentine's Day; the new ones don't have the Heart of the Ocean on them. So, if you haven't seen it yet, get out and see it! I plan on seeing it once a week until it's out of theatres. How often are you going to see it?

My Collector's Edition 4-Disc Titanic Soundtrack just arrived! I love it so far, of course. All the tracks have been re-mastered, and on a good set of speakers the music definitely sounds fuller than ever before. If you don't have yours yet, be sure to grab it soon! There's a 2-disc Anniversary Edition, and a 4-dish Collector's Edition.

James Cameron's Titanic has also been re-released, and is availble for order here.

CNN is inviting Titanic fans to submit their "I'm flying!" photos to welcome the film back into theatres. You can submit yours here.

Who watched the live broadcast of the Premiere in London today? I sure did—at work, nonetheless! If you missed it, or you want to re-watch it, you can at http://www.live.titanicredcarpet.com/.

I've got a few exciting things! First off, Canada Post has just announced a series of commemorative Titanic stamps. They're very handsome. And, The Canadian Mint just released a series of Titanic coins.

CNN will be conducting an interview with Kate, Leo, and James soon. You have a chance to submit a video of your questions here, due March 24.

They are releasing special edition Titanic soundtracks, and they are now available for pre-order through Amazon right now! There's a 2-disc Anniversary Edition, and a 4-dish Collector's Edition. They've been remastered and include new tracks! If you didn't grab Back to Titanic in the 90's, now is a great time to get it, it's a great album!

Fairmont Resorts is hosting a great Titanic contest. The lucky winner of their love-themed photo contest will win a trip to London, a stay in their fancy London hotel (The Savoy), and tickets to the premiere of Titanic 3D! Enter here.

Paramount has just released early preview tickets to see Titanic in Real3D across Canada and the United States! Act fast to grab your tickets! Click here to get started.

I just found a very promising pattern website, and best of all, it's Titanic-themed! The first pattern they've released is the Flying Dress, and I have to say, it looks great. Up next are the Swim Dress and the Kimono, and they look beautiful as well. The patterns are available as wonderfully affordable downloadable PDF documents. Be sure to stop by the Historical Pattern Co. and take a look if you're planning on making something from Titanic!

I just got back from the advance screening of Titanic 3D. WOW. It was incredible. I cried for at least the last hour of the film. After revelling in the magic that is Titanic on the big screen for three hours, the entire audience was given gift bags containing a poster and a Titanic t-shirt! And, I have to say, the 3D is absoloutely worth it. The perspective it gives to the ship and the sinking add so much gravity to the film; I didn't know it, but I have never appreciated just how big the Titanic was, and how high up Jack and Rose were at the end of the sinking. Just... wow. And, the release date has been pushed forward to April 4, 2012—two days earlier! Exciting news, folks!

If you're not going to be in New York and still don't have tickets to a Valentine's Day screening, CollegeCandy.com is giving some away.

And, in even more exciting news, the Official Titanic Website has been re-vamped! It's looking pretty handsome, and has some great new photos and a nice video featurette.

Alright, Titanic fans! I've got some great news for you if you're in the New York area, 43Kix NYC has teamed up with Make it Count to offer you some free tickets to a special advance screening of Titanic 3D this Valentine's Day! I'll be at my local, Canadian, showing on Valentine's Day, but if you're in New York, be sure to go an let me know how it is—there's a reception, too! Stay tuned for details.

Want to see Titanic 3D early? Paramount is offering FREE tickets to advance Valentine's Day screenings across North Amerca through their Facebook page with Gofobo! I just got mine, and I can't wait! Hurry, there are a limited number of tickets!

So, with the re-release of Titanic coming up, who has decided what they're wearing? I'm thinking of re-creating yet another costume; perhaps the Elevator dress or the Lunch dress?

The trailer for Titanic 3D is out! It's amazing. Makes me tear up every time.

The first Titanic 3D poster has been released! 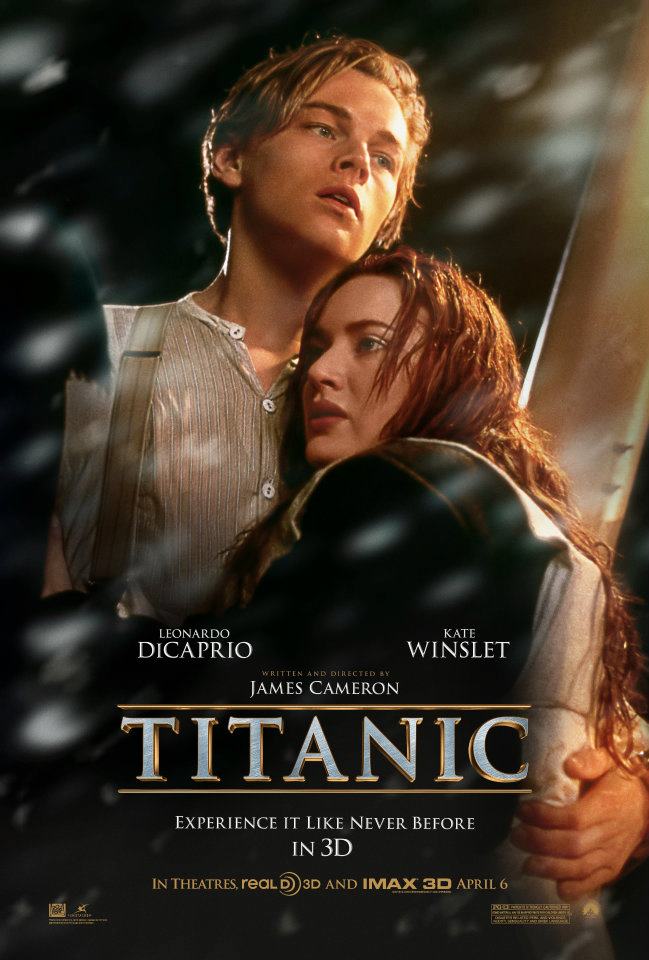 I just learned about a new Titanic miniseries that is currently in production. It's called Titanic: Blood & Steel, and it focusses on the building of the ship. It's filming in Ireland, and stars Canadian Kevin Zegers and Chris Noth of Sex and the City/Mr. Big fame. Looks fascinating!

So, who is excited for Titanic in 3D? I am really pumped—it's a great opportunity for anyone who didn't catch it first time around. I bet it'll spark a whole new generation of Titanic lovers. I'm definitely going to take the opportunity to see it in 3D and normal 2D on the big screen. Read more here.

I did it! I fixed the gallery, too! That's something I promised myself I'd never do, due to it being an insanely huge undertaking, but I just did it! And it wasn't even as bad as I thought it would be. Rad. So, head on over and check that out. All the iFrames are working properly again, and things are looking pretty spiffy and coordinated. Aren't I proud?

Re-vamp! Whew! That took... a long time. Yikes. I've taken everything out of iFrames and moved into CSS and PHP includes, and it took forever. But I think it was worth it. I also got rid of dead affiliates and content I have no intention of ever updating. Next up, I'll fix up the gallery. That's going to be a lot of work. But hey! I'm not dead, and I'm not closing! Woo!